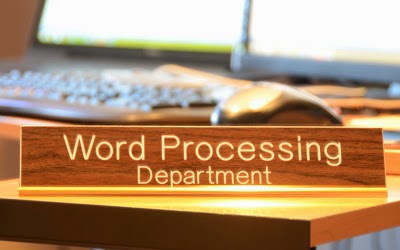 It is hard to imagine that there is such a thing as a Word Processing Department today.

When I was an IT Director many moons ago, I found a sign like this (full disclosure, this is a reproduction… but I wanted one for myself). It went back to a day when my predecessor supervised the Word Processing Department. It was 30+ years ago and they discovered word processing software (a Data General product called CEO that ran on their MV 4000) and the HP LaserJet printer. They had one of the first LaserJets; it apparently cost around $5,000 and I was recently told “it was worth every penny.” Since they were sharing the one LaserJet printer at the College among 30ish administrative employees, they consolidated their resources in the Word Processing Department.

When there were letters to be distributed to donors, prospective students, alumni, students or other big lists, they looked to the Word Processing Department to format, mail-merge, and print. It is hard to imagine a day when it took a third-party with special skills and gear to produce a letter, a day when folk would schedule a walk between buildings to get to the one shared laser printer on campus.

I imagine that there was a season of frustration that preceded the demise of the Word Processing Department.

In this specific case, I don’t know how it all shook out… whether the Word Processing Department died slowly, clinging to the perceived value of centralized resources (and control) or they were glad to distribute the tools widely as soon as possible.

These days, in part of my work, I’m seeing something along these lines when it comes to Web. When it comes to Web, organizations easily see the outward-facing value and develop their Web presence. When the Web was getting started it was common for the IT Department to be the first to manage things, not merely providing infrastructure, but also designing the site and developing content (it is on computers after all, so it must be an IT thing). Before long that gets frustrating for the organization and management of the Web (still mostly outward facing) moves to a unit more aligned with the marketing functions of the organization.

Eventually we realize that there isn’t anything all that mystical about the technology and the tools are distributed. It could be as simple as a bifurcation, splitting between internet and intranet, or it could be distributed among several outward-facing and inward-facing strategies.

I’m also seeing a similar sort of thing happen with video. A marketing department develops expertise in producing outward-facing video, and then the organization determines that the same tools could be powerful for internal communication.

I am very much in favor of powerful and efficient internal communication. And I am in favor of collaboration and cross-pollination in such ways in which, for example, a marketing department would serve as a resource to help more inward-facing initiatives ramp up.

But my concern is that it easy to lose focus, allowing powerful internal voices to draw marketing departments away from their main thing. The perceived efficiencies gained by centralizing resources and control are not worth the price of neglecting, or even diluting, outward-facing work.

Do you have any Word Processing Departments in your organization?